COVID19: Yes, we are open! See how we’re preserving the health of our customers and protecting their property.
Antique Organ Was Saved From Termites 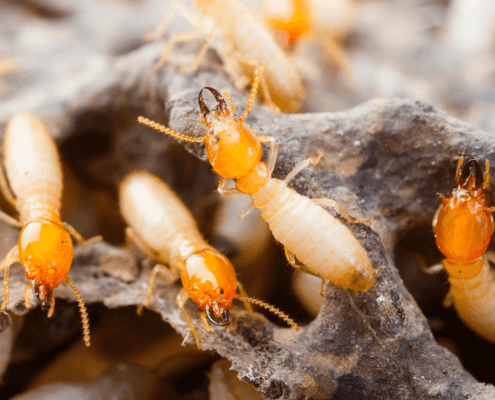 Although church attendance has been declining during recent decades, most people still cannot help but to associate organ music with the church-going experience. Christian churches have long made use of organ music during group choirs and at the beginning and end of church services. When the modern pipe organ was in its infancy, the music was enjoyed as a secular form of entertainment, but the large instruments eventually came to be associated with the Catholic Church. However, pipe organs can now be found within many Christian churches. As you may already know, pipe organs are the largest musical instruments, so they are not always ideal for use in small chapels. Luckily for organ-lovers, a smaller and much cheaper version of the pipe organ was developed and sold within the United States and Europe during the nineteenth and twentieth centuries. These organs produced sound through reeds, as opposed to pipes. These organs are known as pump organs, or reed organs, and they were common in people’s homes and small churches during the last two centuries. However, the invention of the electronic organ during the 1930s resulted in the eventual discontinuation of pump organ manufacturing. Today pump organs are rare, and most of them that still exist have been restored by antique collectors. Not surprisingly, pump organs are considered valuable relics of the past that can sell for significant amounts of money. Sadly, one of the world’s most well-known pump organs sustained serious termite damages while being displayed in an old chapel located in Honolulu, Hawaii.

Back in 1984, an Etsy-brand pump organ that was built in 1890 had been donated to the newly built Mission Chapel that was, and still is, located on the premises of the Polynesian Cultural Center in Honolulu. Although the pump organ was well cared for after it was donated, years of humidity and pests had rendered the instrument unplayable, and structurally compromised. The most recent, and only successful attempt at restoring the pump organ involved a piece-by-piece disassembly, and many portions of replacement wood. The restoration effort lasted for an entire year, and termite damage beneath the organ’s keys nearly made the instrument a total loss. Each of the sixty one keys had to be replaced as they were all damaged by termites. After many prayers, the restoration attempt proved to be a success, and the refurbished pump organ can now be heard in all of its glory by tourists visiting the Polynesian Cultural Center.

Do you think that the conditions within the wooden pump organ provided the invading termites with all of the sustenance and nourishment that they needed to survive?

Which Termite Species Are Most Destructive In Texas, And Where Can They Be Found In The State

3 Ways Homeowners Are Inviting Termites Into Their Homes

Waco Ant Control Tips! | iPest Solutions How Are Insects And Spiders Trained To Perform In Movies And TV?
Schedule Your Free Inspection
Scroll to top