COVID19: Yes, we are open! See how we’re preserving the health of our customers and protecting their property.
Cricket Outbreaks In Texas

Most people understand crickets to be non-threatening insects that can hop and make chirping sounds. Any further knowledge concerning the nature of these insects is considered superfluous to your average citizen. After all, crickets are not a significant part of anyone’s life. Well, for most people this is true, but for some residents of Texas, crickets can become omnipresent creatures during the late summer and early fall months. This is because certain cricket species are known for invading areas of Texas in massive numbers. These “cricket outbreaks” do not occur every year, and when they do, the outbreaks are, thankfully, limited to single towns, cities or counties, and not the entire state of Texas, as that would be horrifying. As you can imagine, these outbreaks often bring crickets into people’s homes, where they can damage clothing, drapery and wall paper. These materials can become stained with cricket vomit or feces, as well as from their feeding activity. Although crickets do not typically feed on textiles, clothes that contain human sweat and body odor sometimes sustain cricket damage. While researchers know that certain environmental factors can increase the likelihood of cricket outbreaks, there is still much that researchers don’t know about this phenomenon, as Texas cricket species are relatively understudied insects.

According to Justin Hale with the Texas AgriLife Extension Service in Johnson County, dry spring and dry summer seasons greatly increase the chances of a cricket outbreak. It is believed that a prolonged period of dry climate allows more cricket eggs to complete their life cycle and develop into fully grown adults. It has also been speculated that the dry climate prevents the formation of fungal diseases that often affect and kill large amounts of cricket eggs and larvae, but no studies have been conducted to verify this theory. Although residents of Texas don’t have to worry about these crickets spreading disease, during outbreaks crickets can become a nuisance for homeowners, as crickets are attracted to artificial light sources located around homes and buildings. In order to prevent massive amounts of crickets from invading your home during an outbreak, it is important to tightly seal door thresholds, weep holes, windows and garage doors, as crickets are known for accessing homes in these areas.

Have you ever heard about a cricket outbreak on the news or from a friend or relative who had witnessed one?

Keep Pests Outdoors Where They Belong This Winter 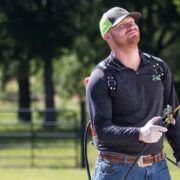 A Family Became Speechless After Finding Three Raccoons In Their Home After...

A Rabid Bat Fell Out Of A Student’s Pocket Amidst Public Health Warnings About...
Schedule Your Free Inspection
Scroll to top