COVID19: Yes, we are open! See how we’re preserving the health of our customers and protecting their property.
Termites Use Clay To Prevent Collapsing

While it is obvious to most people that termites consume wood, many people are not aware of the fact that termites consume wood in order to retain cellulose, which is the main constituent of plant cell walls. Termites are lucky in that cellulose is one of the most abundant organic compounds on the planet, so the insects do not have to travel far to attain their essential nutrients. Most termite species, including all species native to the United States, find their cellulose within sources of wood, such as dead rotting logs, wood debris, dead trees and most notably, structural lumber. In some cases, termite colonies will feast on sources of wood that bear significant loads of weight, such as at the base of a tree or structural lumber. In other cases, termites infest light pieces of wood that bear very little weight, such as mulch, twigs, logs and tree stumps.

As termites dig tunnels within wood and consume the excavated particles, infested wood can become completely hollow or partially hollow. As you can imagine, this is problematic for termites that feed on load-bearing wood since hollowing out the wood located at the base of a structure will, obviously, weaken the structure, making the eventual collapse of an infested tree or house inevitable. While nobody wants their house to collapse or partially collapse due to a termite infestation within the base of their home’s timber frame, termites also want to avoid this outcome, as such a collapse would crush an entire colony to death. Researchers now believe that termites may be able to perceive the difference between load-bearing and unloaded wood sources in order to avoid the dangers of colonizing sources of wood that could collapse over them.

Both entomologists and pest control professionals have long been aware of the fact that termites use clay sourced from soil to coat the tunnels that they build within wood. However, the reason for this interesting use of clay is only now becoming clear to researchers. According to a study published a few years ago, termites only apply clay to tunnels built within load-bearing wood sources so as to prevent collapse by providing structural support once the clay hardens. By coating hollowed tunnels with clay, termites compensate for the initial structural weakness that results from excavating wood at the base of a load-bearing structure. In other words, termites work to maintain the structural integrity of the load-bearing wood sources that they infest. Apparently, in addition to consuming structural sources of wood, termites also work to keep them standing.

Have you ever seen a plaster cast of a termite nest located within wood at an entomology museum or anywhere else? 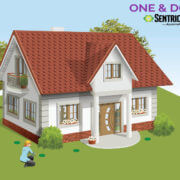 The Most And Least Common Termite Pest Species In Texas, Where They Are Found, And The Degree Of Structural Damage They Are Known To Inflict In The State

Termite Activity In Soil Was Once Regarded As “Ecological Magic”

How Have Formosan Subterranean Termites Traveled To Regions Well Outside Of Their Habitat Range?
0 replies

The Tiny Insect Pests That Invade Homes In The Millions Every Year In Central...

Coronavirus: Message to Our Customers
Scroll to top