COVID19: Yes, we are open! See how we’re preserving the health of our customers and protecting their property.
Is Your Home Vulnerable To Subterranean Termite Infestations?

All termite species are divided into three groups known as subterranean, drywood and dampwood termites. Subterranean termites are aptly named for strictly maintaining an underground habitat where moist soil provides them with constant hydration. Drywood and dampwood termites, on the other hand, do not make contact with the ground soil; instead, these two groups of termites dwell in colony-nests that are entirely contained within single above ground wood items, such as logs, fallen branches, tree stumps, and of course, woodwork. Subterranean termite colonies see workers leave nests in order to gather food sources consisting of any type of plant material that decays slowly, mainly wood. Subterranean termite workers frequently encounter housing foundations where they build airtight mud tubes in order to access indoor structural wood without succumbing to the desiccating effects of outside air. Drywood and dampwood species only infest homes as reproductive swarmers (alates), which take flight annually. Unsurprisingly, subterranean termite infestations account for more than 80 percent of all termite infestations reported in the US each year.

Do you have a dirt-filled porch on your property? 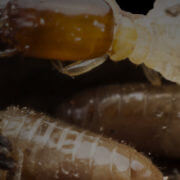 Which Termite Species Are Most Destructive In Texas, And Where Can They Be Found In The State

3 Ways Homeowners Are Inviting Termites Into Their Homes

Longjawed Orbweavers Are Very Common Indoor Spiders, And They Are Known For...

How To Protect Your Family And Pets From Indoor Infestations Of Disease-Spreading...
Scroll to top