COVID19: Yes, we are open! See how we’re preserving the health of our customers and protecting their property.
Kitchen Is The Worst Indoor Area To Find Cockroach Pests

Insect pest infestations can occur in just about any indoor location including basements, attics, wall voids, and even the top floors of high-rise buildings. Both pest control professionals and homeowners alike largely agree that kitchens and food storage areas are the worst rooms possible for an insect pest infestation to take form. This is because many indoor insect pests are well known for their attraction to both indoor foods and pathogen-rich sources of organic waste. For example, American cockroaches congregate in sewers where they feed on organic waste in the form of excrement, but they also frequently move into homes where they can mechanically transmit sewer-dwelling bacteria to human food sources in kitchens and pantries. The Food and Drug Administration has compiled a list of the common insect pests of homes that are capable of mechanically transmitting numerous disease-causing microorganisms to food. This list is known as the “dirty 22,” and it includes four cockroach species, 12 fly species, and two ant species.

The four most commonly managed cockroach pest species in all areas of the US are German, American, Oriental and brown-banded cockroaches, and each of these species are considered a public health threat due to their potential for spreading disease-causing organisms to foods. The most common and filthiest of these cockroach species is the German cockroach, and they are attracted to moisture, heat, cardboard, and food debris located beneath appliances. German cockroaches dwell primarily indoors, and adults, nymphs and/or eggs are often transported into homes within storage boxes, old books, newspapers, and grocery store items in paper bags. American and Oriental cockroaches are peridomestic pests that exploit storm drains and utility tunnels to enter homes, and the former is known for traversing pipes in order to relocate into homes from sewers. Look for cockroaches in kitchen cabinets, around pipes, beneath sinks, around the dishwasher and refrigerator, and any high moisture area where food crumbs have likely collected.

Have you ever found one or more cockroaches on food within your home?

In An Effort To Rid Her Business Of Insect Pests Without Professional Assistance, A Woman Blew Up Her Salon 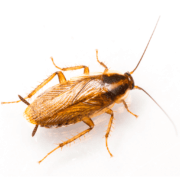 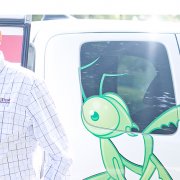 More Than Half Of All Kissing Bugs That Invade Central Texas Homes To Feed On...

Everything Homeowners Should Know About Potentially Dangerous Yellow Jackets,...
Schedule Your Free Inspection
Scroll to top