COVID19: Yes, we are open! See how we’re preserving the health of our customers and protecting their property.
Three Most Commonly Managed Rodent Pests In Central Texas

The Three Most Commonly Managed Rodent Pests Within And Around Residential And Commercial Structures In Central Texas, And The Medical And Economic Problems They Cause

Rodents are ubiquitous throughout Texas, as well as the entire world, and several rodent species are recognized as being the most successful organisms in existence. Unfortunately, rodents are also among the most common and economically costly pests of homes and buildings, as rodent pest activity costs billions of dollars annually when taking control efforts and property damages into account. Of all the rodent species that are considered pests of homes and buildings, the norway rat, roof rat, and house mouse are the three most commonly managed and economically costly rodent pests in Texas.

The house mouse is the most commonly encountered species in all types of structures, and the house mouse is easily the most commonly controlled rodent pest species in all areas of the US. The Norway rat is the dominant rat pest in most urban areas throughout the US, and the roof rat is most prevalent in the southern states, and to a lesser extent, the mid-Atlantic states. While the pest behaviors exhibited by these three rodent species differ in many respects, each one inflicts similar forms of property damage, such as gnawing on building materials, cables, plastic pipes, and wires. Surprisingly, experts estimate that rodents chewing through electrical wires may cause up to 25 percent of house fires that start due to unknown factors.

In addition to inflicting property damage, house mice, Norway rats, and roof rats each eat human foods, contaminate indoor areas and food with pathogen-rich feces and urine, introduce secondary pests like fleas into homes, and they transmit several disease pathogens to humans both mechanically and biologically. Although rodent pests establish indoor harborages within inaccessible spaces like wall voids, ceiling voids and tight attic spaces, it is important for homeowners to be diligent about sanitizing all indoor areas where rodents are both known and suspected of being present. Finding rodent fecal pellets, smudge marks along wall trim, and detecting a foul odor are the most common signs of an indoor rodent presence. Before sanitizing indoor spaces that have been soiled by rodent pests, homeowners should wear a protective mask, gloves, and if possible, protective eyewear in order to avoid pathogen exposure. In most rodent infestation cases, a professional pest inspection is necessary.

Have you ever set traps for indoor rodent pests? 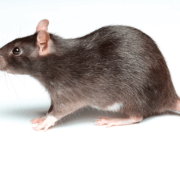 Have COVID Lockdowns Really Made Rodent Pests More Prevalent And Aggressive Toward Humans Around Suburban Homes?