Most Americans do not have to worry about scorpion encounters, but if you live within America’s southwest region, then you know that you are not one of these lucky individuals. Scorpions are well represented throughout the southwest, and they are responsible for sending many people to the hospital each year. Every summer, residents of the southwest US are forced to keep on the lookout for scorpions. During the summer’s hottest periods, scorpions seek respite from the heat by invading people’s air conditioned homes. Sometimes, scorpion populations can be large enough to concern public health officials, and this seems to be the case this year in certain regions of Texas. Recently, the government of Texas warned residents about the scorpions that they will soon be finding within their homes. 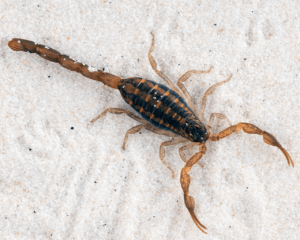 Officials working with the Texas Parks and Wildlife Department have issued warnings to residents concerning scorpion migrations into people’s homes. The department posted a picture of a local scorpion mother with numerous babies traveling on its back. The scorpion in the picture was found on the front porch of a residential home in Austin. The department posted this picture to its Facebook page in order to alert the public of the current scorpion threat. As you can imagine, the photo did manage to capture the attention of citizens living all over the US. So far, the scorpion photo has been shared by well over 8,000 Facebook users. In addition to the photo, the department posted a caption beneath the photo explaining how frequently scorpions invade homes. This message has proven effective, as the post has received many responses from horrified Facebook users living in Texas and elsewhere.

Unlike most other arachnid species, scorpions are fussy about their environmental conditions. A scorpion’s internal temperature must remain at a stable level in order for them to survive the summer heat. This means that scorpions regularly invade homes during heat waves as a survival necessity.

Have you ever encountered a scorpion mother with its own brood within an indoor area?