COVID19: Yes, we are open! See how we’re preserving the health of our customers and protecting their property.
Silverfish Eggs Most Often Located

The common indoor pest species, Lespisma sacchrina, is frequently referred to as the “silverfish,” and these odd-looking creatures are considered both nuisance and economically significant indoor insect pests in all areas of the US. Silverfish (both singular and plural), are members of the Zygentoma insect order, but historical, and in many cases, even current sources of entomological literature refer to silverfish as Thysanura species. This is because silverfish were long included as species within this now defunct insect order.

Silverfish are among the most ancient of all existing insect groups, as their emergence predates cockroaches and most other primitive insects. This is not hard to believe for those who have encountered silverfish within homes, as these pests do not resemble typical insects due to their bulky body which detracts from their relatively small six legs. Some find silverfish to be more reminiscent of marine animals in appearance, as their fairly soft ½ to ¾ inch long bodies are covered in tiny silver to brown-colored scales. Although silverfish thrive in particularly humid environments, they are common in all areas of Texas where they congregate and reproduce in moist indoor areas, often in large numbers.

In addition to being an annoyance to humans within structures, silverfish are also eat away at a number of valued materials, including book pages, wallpaper, glue in bookbinding, glossy paper, photographs, hair, dead skin, numerous human foods, occasionally wood, and a number of fabrics, such as silk, rayon, cotton, and others. In many infestation cases, silverfish damage to property is minimal, but infestations often go unnoticed, sometimes allowing the pests to inflict costly damages.

Silverfish hide within dark and moist indoor areas during the day, most notably in bathroom and kitchen wall voids, basements, and occasionally, attics. Females are able to reproduce within moist indoor areas where they deposit their oval-shaped eggs in cracks and crevices on walls and flooring. Silverfish are very small at 1 mm in length, and they are initially soft and white, but they become firm and yellow within a few hours following production.

Have you ever discovered insect eggs within your home? 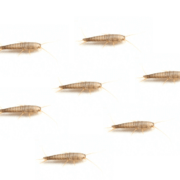 Are Red Harvester Ants Harmful To Property Or Human Health?