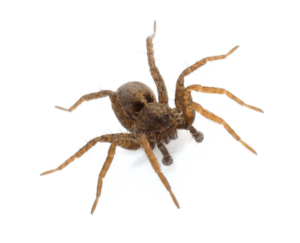 Most people believe that humans are the only or one of the only animals on this planet that can see in color. Until now scientists didn’t think insects could see in color, but that fact has just been proven wrong. Scientists recently discovered that peacock spiders can actually see colors, and have the color vision necessary to see and appreciate the male’s brightly colored bodies and their display to attract females. But researchers aren’t stopping there. Now scientists want to see if other spiders with less colorful bodies also have the ability to see in partial or full color.

George Uetz, a biology professor at the University of Cincinnati, joined together with his students to see if the plain old brown wolf spider has color vision. “The assumption was wolf spiders don’t pay attention to color. But we found that isn’t really true,” Uetz said. “We need to look more closely at the neurobiology of their eyes. We need to understand what their retinas do.” Humans have what is called trichromatic vision, which means we have retinal cells that are designed to see red, blue, and green. Uetz and his students found that wolf spiders actually have dichromatic vision, which means they can only see green and ultraviolet colors. Basically, they are color blind, but they can see light in green wavelengths.

Uetz took a group of male and female wolf spiders and studied how they reacted to videos of a courting digital spider on different backgrounds. They changed the color, intensity, and contrast of the background to see how they reacted. The female spiders proved more interested in the videos where the male spider contrasted sharply from the background. The female spiders also reacted more to the color and monochrome backgrounds, rather than the grayscale one, suggesting that color does indeed make a difference to spiders. For the females the intensity seemed to matter more than color, but with the males they showed the videos to, the color also matters. Another thing Uetz discovered was that the spiders’ eyesight also appears to adapt to the changing seasons.

Do you think other spiders see in color? Which ones do you think see the most colors on the light spectrum, such as red, green, and blue like us humans?