As you already know, many spiders and insects use venom to defend against predators and disable prey. While arthropod venom is highly effective at killing small insects, venom does not have a fatal effect on humans. Numerous arthropods have adapted the ability to inject venom into the animals that pose a consistent threat to their survival. For insects and spiders, the most significant predatory animals are other insects and spiders, not larger sized mammals. Therefore, arthropod venom is not typically strong enough to kill a human. However, there is a small handful of arthropods that are downright deadly to humans, and history is full of examples that demonstrate this fact. As it turns out, venom is not always a factor in insect-related deaths. You would be surprised at the number of ways in which people have died as a result of insects and spiders. 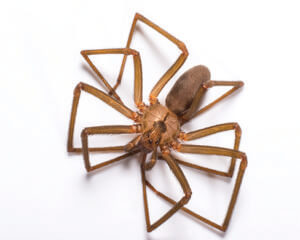 You have probably heard the popular children’s nursery rhyme about an old lady’s dubious survival following the seemingly deadly act of swallowing a fly. Well, as it turns out, swallowing a fly can be deadly, as two cases from the late 1800s demonstrates. During 1894 in St. Louis, a young child, Eugene Dixon, swallowed a fly while laughing in his home. An hour later, Eugene fell violently ill. This illness lasted for five days until Eugene died in a state of tremendous pain. The cause of his illness is still a mystery, but doctors considered the filthy fly as a cause.  One year later, in 1895, a sixty year old man, Daniel Miller, died after accidentally swallowing a fly. In this case, doctors theorized that the man was poisoned by a chemical that the fly had picked up from a sticky fly trap.

Deaths by insect also occur as a result of creepy crawlies entering our orifices. For example, during 1907 in Atlantic City, a nine year old boy, Summers Braddock, died after enduring months of severe head pains. An autopsy later revealed that the boy had a large beetle wedged deep within his ear canal. In 1871, within the town of Ashley, Pennsylvania, a two year old died under what had initially been considered mysterious circumstances. An autopsy revealed a large horned beetle in the baby’s digestive tract. Doctors believed that the baby’s mother unwittingly served the baby water from a glass that contained the beetle.

People have even died as a result of butterfly activity, albeit in indirect ways. One incident that occurred in 1899 Connecticut involved a young girl’s fatal fall from a balcony. This fall came as a result of the girl’s attempt to snatch a picaresque butterfly. A boy living in 1907 Kentucky died after a moth became lodged within his windpipe. Sadly, the boy asphyxiated as a result of the blockage. Other insects, such as ants, maggots, bed bugs and roaches, have also been implicated in a number of deaths over the course of human history. So don’t let anybody tell you that insects are harmless.

Have you ever experienced anxiety over the presence of a nearby spider or insect?