COVID19: Yes, we are open! See how we’re preserving the health of our customers and protecting their property.
Venomous Arthropod Bites

Officials with the North Texas Poison Center state that calls from residents asking about venomous arthropod bites and stings rise in tandem with outside temperatures. Those working for the organization say that calls of this sort reach their peak during the month of July, and the most common bites and stings reported to the poison center tend to be inflicted by honey bees, wasps, black widows, brown recluses, and surprisingly, caterpillars.

It is not surprising that harmful honey bee encounters become more common at this time of year in north Texas, as these bees, which are commonly referred to as “killer bees,” can be found in most counties in the state. Last April, hundreds of thousands of Africanized honey bees emerged from wall-voids within a woman’s home in North Texas. Although the woman sustained several bites, including one on her eye, she survived the harrowing incident. However, a month after this incident occurred, a man living in Moody died after sustaining numerous stings from a swarm of Africanzied honey bees while mowing his lawn.

A couple of weeks ago, a 14 year-old southlake resident moved a branch out of his path as he had been walking to his house. Not long after grabbing the branch, the teenager felt a burst of burning pain that began to radiate through his arm. As it turned out, the teenager made contact with an asp caterpillar that had been resting on the branch. According to the teenager, his fingers suddenly felt numb, but minutes later, severe pain set in. After the boy’s mom called the poison center, she was instructed to remove the caterpillar’s venomous spines from her son’s fingers using tape. Luckily, the teenager did not suffer a severe allergic reaction to the sting, but many people across Texas require emergency room treatment after making contact with an asp caterpillar. These caterpillars are often found in residential yards where they pose a significant threat to curious toddlers and pets.

Have you ever found an asp caterpillar in your yard before? 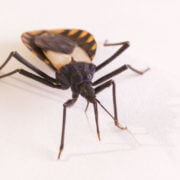 Red-Shouldered Bugs Are Often Mistaken For Boxelder Bugs, But Both Species Are Common House Pests During The Fall Season

You Won’t Believe What Caused An Elderly Woman’s Lifelong Houston Home To...