It may be hard to believe, but for thousands of years, insects have been a source of inspiration for many artists. One of the earliest cave paintings ever found depicts insects, and Renaissance artists used a type of red paint that was made from ground up cochineal insects. However, one artist from China is using insects in a way that has never been thought of before, and needless to say, his art is quite strange. Zhang Yuebai is an artist and insect enthusiast who creates sculptures made of hollowed out insect corpses.

Zhang orders a variety of different insect species from online vendors. Once the insect-filled packages arrive to his home, Zhan removes every bit of each insect’s innards. Although this may sound like a macabre act, Zhan feels as though his artwork is ultimately a celebration of insects. Once an insect’s guts are removed, Zhand dips the insect’s body into preservative chemicals. Once this is complete, holes are drilled into the hardened insect corpse so that he can place several mechanical parts inside of the hollowed out body. These mechanical parts include gears from watches and sometimes even valuable gemstones. Zhan also builds armor for his insects using the same types of materials. The final products looks like a sort of robo-insect. 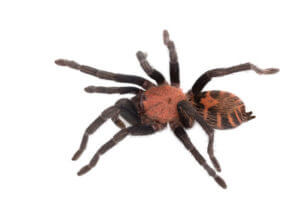 According to Zhang, who is only 23, his insect sculptures can take a long time to complete, as the process requires patience and precision. Zhang does not just work with insects, but enjoys working with the occasional arachnid as well.  He once accidentally broke the legs of a preserved spider that he was making into one of his sculptures. The insect sculptures created by Zhang retain their natural colors, and he moves each sculpture into positions that are fitting for a particular species. For example, Zhang admires the mantis shrimp for its powerful claws, so he made a sculpture with one that featured a mechanical spring mechanism on its claws, which, according to Zhang, represents the force behind each slash of a mantis shrimp’s claw. Zhang takes pride in knowing that he is the only artist of his kind in all of China. However, he is probably the only artist of his kind in the world. Many of Zhang’s sculptures are sold for prices of around two to three thousand dollars.

Do you believe that Zhang’s artwork is inhumane toward insects?

Residents Of One Town Are Losing Sleep Over The Wildlife That Are Creeping Around...
Schedule Your Free Inspection
Scroll to top