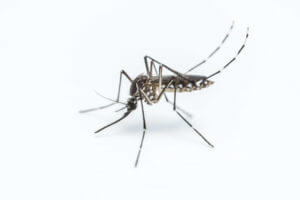 There is probably not a single person in the world who has not, at some point, made an effort to attract members of the opposite sex. In order to improve one’s appearance, a range of options are available, such as exercising, eating right, stylish haircuts, maybe tattoos, and, of course, perfumes and cologne. Although the scent of cologne and perfume may successfully attract the opposite sex, there are some major downsides involved with the use of perfumes, colognes, and even scented soaps and shampoos. If you are fearful of contracting an insect-borne disease, then bypassing the perfume or cologne may be a wise idea according to scientists. As it turns out, scented chemicals attract several types of insect-pests, such as mosquitoes.

It seems that mosquitoes are becoming more and more dangerous to humans as time goes on. Due to the increasing spread of awareness concerning mosquito-borne diseases among the world’s citizenry, just about everyone over the age of three should know that areas of standing water can be hazardous to humans during the summer season, as they attract mosquitoes, many of which carry diseases. According to  Margaret Harris, assistant professor of health for the University of Arkansas’ Division of Agriculture, mosquitoes are attracted to the scents of perfume, cologne and heavily scented soaps just as much as they are attracted to areas of standing water. Since mosquitoes gravitate toward standing water in order to constantly mate, you can understand how appealing artificial scents are to the bloodsucking pests. Surprisingly, mosquitoes are not the only dangerous insects that gravitate toward perfumes and cologne. The well known arachnid pests that spread lyme disease, ticks, have been known to move toward people wearing artificial scents. Fleas and chiggers also fancy people’s attractive scents. If you insist upon applying perfume, cologne or other scented products this summer, then taking other precautions against insect-borne disease is in order. These precautions include long-sleeved clothes, and mosquito repellent. According to Dr. Harris, mosquito repellent that contains less than ten percent DEET should be avoided, as such low levels are largely ineffective when it comes to repelling dangerous insects.

Have you ever noticed that more insects gravitate toward you on days when you apply artificial scents, like perfume and cologne?